The most sacred time of year has returned, yes it is college football, and more importantly the SEC. I will take a look at the SEC East division and give some superlatives as we did for the Western Division of the SEC.

The Bulldogs are hungry to avenge last season’s debacle of disappointment and injuries. They are led by 5th year senior Hutson Mason and arguably the best back in the country in Todd Gurley. We believe they will lose week 2 to South Carolina in Colombia and run the table from there. Most analysts will say that whoever wins that matchup is going to win the East, but I would point to the last 3 seasons where UGA won last season and did not represent the East in Atlanta, but the previous two seasons they lost to the Gamecocks and were in the Georgia Dome for the early-December showdowns. This team will go as far as Gurley takes them, and we believe that is at least to the Dome.

We believe that this is one of the most talented teams in the SEC. The games that we have circled for the Gamecocks are the matchup late in the season at Auburn and when Tennessee comes to town as a possible trap game. They have a solid group of leaders and Mike Davis is a bruiser in the backfield so they should have another successful season. They can manage the schedule but they have some flaws on defense and at receiver, but the offensive line and a backfield with the experience that Davis and Thompson possess, they will be in every game with a shot to win.

The Tigers have a solid team returning and should have success, the main concern this season would be the defensive line. Losing two very productive defensive linemen and having to face several offenses that control the clock, it will be difficult to make it out unscathed. Dorial Green-Beckham was electrifying and he was the key to another SEC east title run, the only problem is that he didn’t have what it takes to stay on the team and has since been kicked off and transferred. The Tigers quarterback Maty Mauk is a game-changer and will compete for a championship before his time in Colombia is over, this just isn’t the year.

This is my surprise team in the east, but they will not quite have enough to run the table. They should be better in year 2 under Butch Jones, as they welcome in some great freshman and return the likes of Marquez North at wide receiver and All-SEC linebacker AJ Johnson in the middle of the defense. I did not account for this in my record prediction, but watch out for Tennessee upsetting Alabama in Knoxville for Lane Kiffin’s return as the OC for Bama, this could be the year.

There are too many people hopping on the Florida bandwagon saying that because Jeff Driskell is back that they will return to form that we saw in 2012, but they fail to realize that the team won those games because of the defense and not Driskell. He has never shown consistency at the most vital position on the field. He will make some plays but ultimately be the reason that they are inconsistent on the offensive side of the ball by stalling drives.

James Franklin is gone and I hate to say it but I just do not think that they have enough to win many games in the SEC this season, but Derek Mason will grow with the program eventually.

It is tough sledding for Mark Stoops and the Wildcats, they are simply a better team in a league in which they can not move up. The team will be stronger and they can beat Louisville, but they will be winless in the conference.

This is the best player in the country as well as the SEC, he always seems to make the difference in his team winning or losing. He is healthy this season and in the best condition since arriving in Athens, thus looking for a huge year. I believe he has the edge to win the Heisman trophy as well.

Possibly the second best player in all of the nation, he just happens to be second at his position in his own division as well due to the aforementioned Todd Gurley.

This stud will be playing on Sundays soon and what is so impressive about him is his versatility in his ability to stop the run and rush the passer. He has stepped out as his defenses leader, and he brings that traditional Florida intensity that we are accustomed to seeing in Gainsville.

This is my favorite person tho watch this season, I believe that he will be the next Sammy Watkins. He is big and explosive, and he will be second focus for defenses as they watch Marquez North on the opposite side of the field, so he should shine as a compliment receiver. 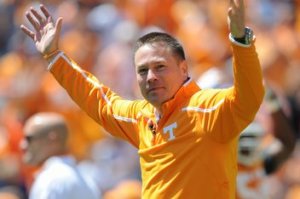 With Tennessee being my surprise team, I believe in Jones and his ability to beat at least two teams that are favored over the Vols this season.

We have a rematch from 2012. This game we believe ends a little differently with the Bulldogs exacting revenge and winning the SEC.

I believe that Georgia has the tools available, especially with Todd Gurley in the backfield, to win the SEC. I think they will then get their shot in the College Football Playoff and defend the SEC’s name for the 2014 season.

So there it is, our SC East Preview. Check out the West Preview to see how that side may shake out, and thank you for reading!

Mailbag: Let us Know What You Think!